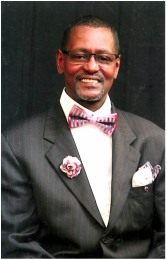 He began his work at Jordan as a member of the Rosebud Singers and a member of the Junior-Intermediate Usher Board.  Pastor James has always been a very active member of the church and his dedication was rewarded when he was appointed to the Deacon Board on November 26, 1989.  After serving as a Deacon for several years, Pastor James was ordained as a Minister on May 24, 2000.  Shortly thereafter, he was named the Minister of Operations where he worked diligently and tirelessly.  Pastor James attended the National Bible College for 4 years.

One of his favorite scriptures is Psalms 121:1-2, “I will lift up mine eyes unto the hills, from whence cometh my help.  My help cometh from the Lord, which made heaven and earth”.

With the retirement of Pastor William J. Smith on January 31, 2004, Pastor James was installed as the pastor of the Jordan Baptist Church.  In this, the baton was passed from Pastor Smith to Pastor James.

Pastor James is very active in the community and is not afraid to embrace those whom God has pre-ordained to enter his path.  He is truly a man of God.  He has a big heart and is always taking from himself and giving to others.  The “Prayer of Jabez” breathes new life into his soul.  “Oh that you would bless me indeed and enlarge my territory.”

Pastor James upholds the Biblical Laws and preaches the gospel sounding the alarm about “The Soon Coming King” who once was considered a stranger in town, giving sight to the blind, turning water into wine, who gave instruction and left full authority to do greater works.

God changed the names of those He chose in service to Him, thus Pastor James is now called “Rev. Outlaw James” who carries the anointing to set the captives free.  He waters the seed.  The seed takes root and grows.  In the final stage, the Christian stands fully developed.